Newton Gimmick (usually referred to as Gimmick,) is the tritagonist and good friend to Teddy Ruxpin and Grubby.

Gimmick is a Perloon, a small race that has striking, almost human features. He is older, balding, and always sports a pair of black rimmed glasses. Gimmick's outfit is also quite unique, including a blue-green shirt and a frock carrying his various tools for inventions. Gimmick also sports miss-matched socks and brown shoes.

At first glance, Gimmick might seem to be a bit out there. Despite his love of long, often irrelevant words and technical jargon, Gimmick proves himself to be a true genius. Despite his headstrong, sometimes obnoxiously stubborn ways, Gimmick has always been a good friend to Teddy, Grubby, and especially to his pet Fob Fuzz.

Gimmick has a speech impediment that causes him to repeat certain words, and he often uses many filler sounds such as eh, er, and umm. It is unknown where or how he developed this condition.

Gimmick's first appearance is in The Airship, the beginning of the Adventure series. Besides Teddy and Grubby, Gimmick is a leading figure in the Adventure series, starring in nearly all of the stories. His personality is a little more muted in the books and tapes, due to the limitations of the story being compressed onto a cassette tape. Much more of his snappish, stubborn side can be seen in the cartoon. Despite this, Gimmick fills a very nice role as the smart Perloon who's always got an idea to make Grundo a better place to live.

The Adventures of Teddy Ruxpin[]

Gimmick appears in nearly all of the episodes of the cartoon series. With the added time and development of the series, Gimmick is allowed more character building. Due to John Stocker voicing Gimmick in the animated series, Gimmick's voice becomes slightly higher and more strained, adding more to Gimmick's more high-strung, stubborn personality. Though the two versions of the character have some differences, they are very much the same throughout both. 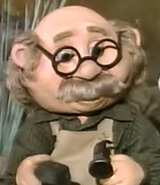 A close-up of Gimmick from the Live Action Special

Community content is available under CC-BY-SA unless otherwise noted.
Advertisement